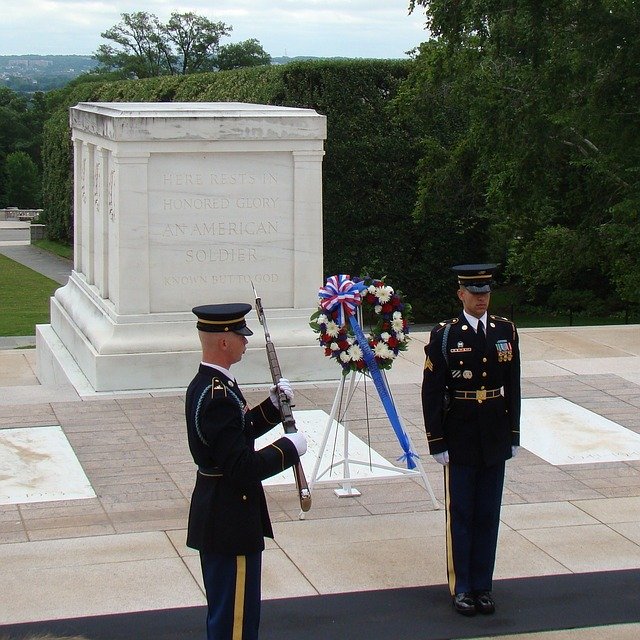 “Share in suffering as a good soldier of Christ Jesus. 4 No one serving as a soldier gets entangled in the concerns of civilian life; he seeks to please the one who enlisted him as a soldier. 5 Also, if anyone competes as an athlete, he is not crowned unless he competes according to the rules. 6 The hardworking farmer ought to be the first to get a share of the crops”.( 2 Tim. 2:3-6) HCSB

Paul uses three examples: a Soldier, an athlete and a farmer…today, since it is Memorial Day weekend, let’s focus on the soldier.

A good example of an effective soldier is found at the Tomb of the Unknown Soldier in Arlington, VA.

Just like the soldiers who guard the Tomb of the Unknown Soldier, we need to be:

After two years of service, a guard is given a pin in the shape of a wreath, which is worn on the lapel. Only 400 are presently worn. The guard has to obey the rules of the guard for the rest of his life or give up the wreath pin.

24 “Don’t you know that the runners in a stadium all race, but only one receives the prize? Run in such a way to win the prize. 25 Now everyone who competes exercises self-control in everything. However, they do it to receive a crown that will fade away, but we a crown that will never fade away. 26 Therefore I do not run like one who runs aimlessly or box like one beating the air. 27 Instead, I discipline my body and bring it under strict control, so that after preaching to others, I myself will not be disqualified”.

Run the race as a soldier of Christ: faithful, committed, disciplined, single-minded and prepared, because the prize for the believer is to hear “Well done, my good and faithful servant.”

Inside Out
Next
Coals Of Fire