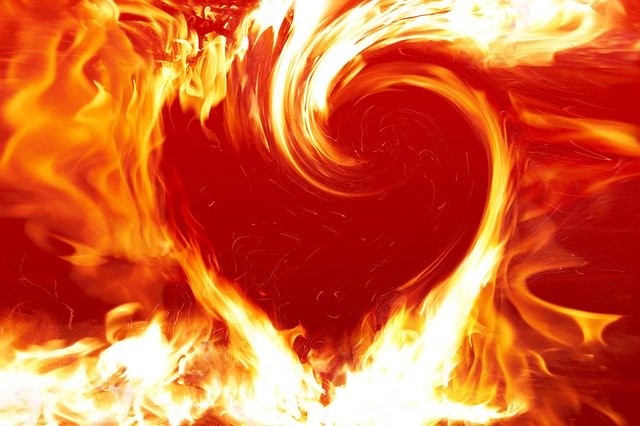 Throughout scripture God’s presence has been exemplified by fire.

In Exodus 3 God appears to Moses in a burning bush that is not consumed. In this instance not only does the burning bush represent the presence of God, but the bush itself represents Moses: weak, frail, a vessel with a speech impediment called of God to lead his people out of bondage to freedom. The only way Moses could accomplish the task to which he was called was for the fire of God to burn unquenchably in his soul, giving him the passion and the courage to face Pharoah, to face the Red Sea, to face the responsibilities of leadership and the challenges of forty years of wandering in an unforgiving desert.

Moses constructs a tabernacle to represent the presence of God among the Israelites. Exodus 40 gives us a glimpse of how God revealed Himself through the tabernacle, “For the cloud of the Lord was over the tabernacle by day, and there was a fire inside the cloud by night, visible to the entire house of Israel throughout all the stages of their journey.” (v. 38)

Three hundred years later King David’s son Solomon built a permanent temple to house the tabernacle representing God’s presence. After a glorious worship service and a beautiful prayer of dedication, “fire came down from heaven and consumed the burnt offering and the sacrifices, and the glory of the Lord filled the temple”. This fire drove all of Israel to their knees in worship and thanksgiving.

Fast forward nearly one thousand years. The Messiah has come, has been crucified, resurrected and has ascended back to heaven. The disciples have experienced the most life-changing events imaginable, and are meeting to reflect and to try to make some sense of what they have just observed. “Suddenly a sound like that of a violent rushing wind came from heaven, and it filled the whole house where they were staying. And tongues, like flames of fire that were divided, appeared to them and rested on each one of them…” (Acts 2:2-3 HCSB) Now the fire that represents the presence of God has moved from the bush to the cloud to the tabernacle to the temple to….believers! The apostle Paul put it this way, “ Don’t you yourselves know that you are God’s sanctuary and that the Spirit of God lives in you?” (1 Cor. 3:16 HCSB)

How is the fire of God exemplified in your life today?

Horn of the Altar
Next
Verses of Encouragement in Difficult Times