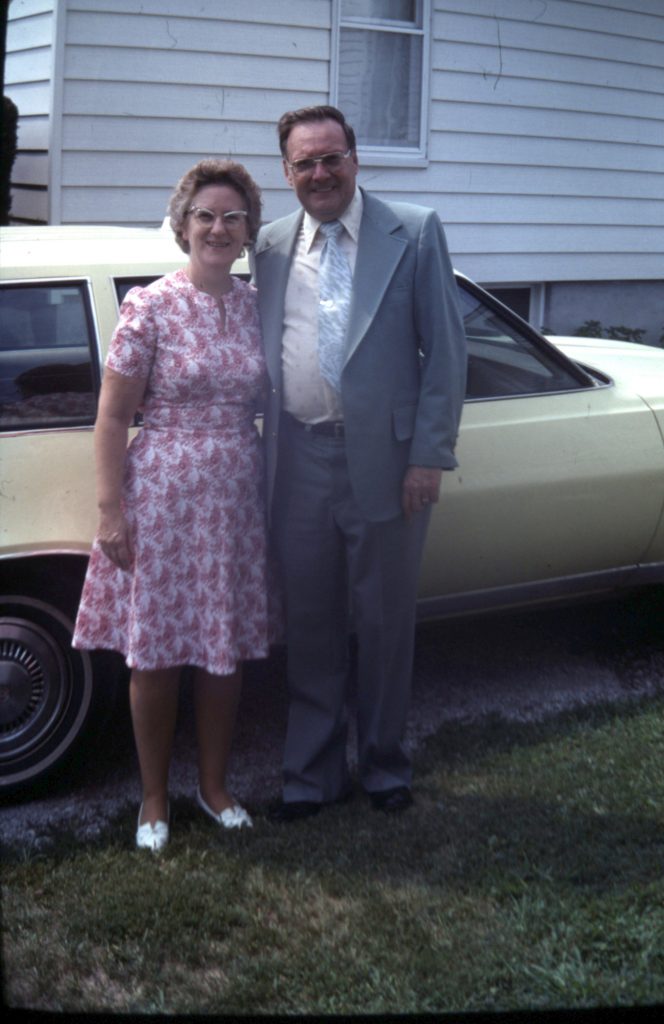 I loved my dad. He passed on to Glory Christmas Eve, 2010 but lives on in my heart. Dad was a generous man. When a missionary couple stayed with us for several days, Dad noticed holes in the man’s shoes. When asked about his worn shoes the man replied “I got them from the missionary barrel and they were already pretty worn!” Dad loaded the man in our family car, took him to the closest shoe store and bought him a new pair of shoes.

Dad sacrificed for his family. When I was seven years old he paid $2.00 / week out of his $25 weekly salary for trumpet lessons for me, then soon added violin lessons for my brother. Eventually he also paid for piano lessons for my sister, then bought trumpets, violins and keyboard instruments so we could all pursue our musical aspirations. Mom never worked outside the home, so Dad’s salary paid for everything, and thanks to Mom’s financial genius we always seemed to have enough.

Dad had a Bible College education, and even though he didn’t become a believer until well into his twenties, he learned quickly and retained most of what he learned. He made sure that we had family devotions around the dinner table, and he took the family to church Sunday mornings and evenings, and Wednesday nights.

Dad had an amazing work ethic. He managed a Christian radio station for years, and it was not unusual for him to open the station at 6:00 AM, work until midnight, then be back at the station at 6:00 the next morning. When he lost that job he was able to get a job building television picture tubes, but he was terribly allergic to the gas that filled the tubes, and would come home crying from the pain every night…but he kept on working day after day through his discomfort.

I loved my dad, but he struggled with anger issues all his life. I don’t know how mom managed his tirades, but I do know that when he passed, she didn’t shed a tear. Mom had a thyroid issue that rendered her helpless to deal with conflict, so she would postpone dealing with any necessary discipline challenges until he got home from work, and then would tell him all about our childish infractions. Dad kept a razor strap hanging on the back of the bathroom door and he would administer discipline with the strap as needed when he was informed of our disobedience. Once, after hearing of my rebellious actions, he took off his belt, made me strip completely, then beat me in a blind rage, raising huge welts all over my private parts. Another time we were visiting friends out of state. My brother, sister and I were in the basement roller- skating with their two children when my sister fell and began to cry. Dad heard the commotion, came racing down the stairs and without asking any questions he assumed that I had knocked her over, and his punch to my stomach knocked the breath out of me.

As I reflect on my dad now, I have a choice to make. I can either choose to remember him for his angry tirades and violence, or I can recall his generosity and unselfishness. I choose the latter. It doesn’t mean that there were no difficult situations, but I would rather remember dad’s positive qualities than his negative ones.

In America we have a choice to make. We can either focus on the failures and indiscretions of the past, or we can choose to remember the victories, inventions, welcoming spirit and friendly neighbors that make America great. I choose the latter. That doesn’t mean that I forget the failures, it means that they don’t identify me as an American citizen. I am grateful for this nation and for the leaders of both parties who have led us to greatness. In spite of hurtful and wrong indiscretions of the past, our greatest days are before us. Let’s learn from the past and embrace the future with boldness and confidence. We have a choice to make. Let’s choose wisely.

Lean On Me
Next
Guilty For Nothing